We use our own and third-party cookies to make our website work safely and personalize its content. Likewise, we use cookies to measure and obtain data on your navigation and to adjust advertising to your tastes and preferences. Press the "Accept all" button to confirm that you have read and accepted the information presented. To manage or disable these cookies, click on "Configuration". For more information see our cookies policy.
Modify cookies
Technical and functional Always active
This website uses its own Cookies to collect information in order to improve our services. If you continue browsing, you accept their installation. The user has the possibility of configuring his browser, being able, if he so wishes, to prevent them from being installed on his hard drive, although he must bear in mind that such action may cause difficulties in navigating the website.
Analytics and personalization
They allow the monitoring and analysis of the behavior of the users of this website. The information collected through this type of cookies is used to measure the activity of the web for the elaboration of user navigation profiles in order to introduce improvements based on the analysis of the usage data made by the users of the service. They allow us to save the user's preference information to improve the quality of our services and to offer a better experience through recommended products.
Marketing and advertising
These cookies are used to store information about the preferences and personal choices of the user through the continuous observation of their browsing habits. Thanks to them, we can know the browsing habits on the website and display advertising related to the user's browsing profile.
July 20th 2022
Best Things To See In Croatia

There aren’t many experiences that will fill you with a sense of wonder like a bespoke yachting holiday in Croatia. The crescent-shaped country has a coast that is over 6,000 kilometres long and 1,224 islands, each with a distinct charm and a different story to tell. The captain of your luxury charter yacht will show you some of the most spectacular natural jewels and show you ancient cities whose beauty persists to this day. In between visiting the impressive landmarks of this gorgeous Adriatic country, you can drop your anchor in hundreds of coves and swim in some of Europe’s prettiest beaches.

With so much to see in Croatia, it can get quite hard to stay focused - although even wandering aimlessly through the mediaeval streets is a magnificent way to spend time.

But, if you’re devoted to using your days to their full potential, there are some places you shouldn’t miss.

The name of this landmark can be somewhat misleading - since it isn’t a small, barely preserved villa, it actually occupies a significant portion of the city centre. Diocletian's Palace is without a doubt one of the best-preserved ancient monuments that once belonged to the Roman emperor and was built in the 4th Century AD.

The huge complex served as the mansion of the famous ruler and a military camp and was separated into four distinct parts with two main streets, and each area today houses additional historic landmarks from different historical epochs.

The Northern Gate or The Porta Septemtrionalis was originally intended as the main gate to the palace where the emperor walked in for the first time in 305. Today, it is the main tourist attraction of the city, where tourists can also visit the 7th Century church devoted to St. Martin.

The Porta Orientalis, Eastern, or Silver Gate has more modest ornaments but gained more importance to the highly devout local Catholics when Pope John Paul II walked through them in 2000. What makes them interesting are the octagonal towards, still visible in present time, and the charming church devoted to St Apoliner in the 6th Century.

The Porta Occidentalis is currently used as the main entrance to the Old Town and boasts an eclectic mix of architectural styles, ranging from the original ancient look to the renaissance and gothic styles.

We love luxury yachts, and emperor Diocletian loved ships - his fleet held immense power at the time, and he built this entrance to the palace to access the walls by the sea.

Inside the Palace, you can also visit the St. Dominus Cathedral, considered to be the oldest Catholic cathedral on Earth still used in its original form.

The Temple of Jupiter

Another thing to lookout for during your balmy stroll through the centre of Split is the Temple of Jupiter, located in the focal square of Diocletian's Palace. It was built between 295 and 305, which featured 12 sphix brought from Egypt - one of them is still there today.

Any fan of the international hit series, Game of Thrones, will recognize this fortress in a heartbeat! Built two millennia ago by Illyrian tribes, this fort has recently gained international fame when it served as a shooting location and fictional town of Meereen. It was used by Romans, Croats, and Venetians, and played an integral part of the defence against Ottomans in the 16th Century.

The first National Park to be established out of 8 in total that exists in this country enchants visitors with marvellous cascading waterfalls whose photos graced the covers of almost every travel publication.

Located in a wild forest reserve, the set of 16 lakes that are connected by waterfalls is part of the UNESCO World Heritage list. During your yachting holiday in Dalmatia, you can visit them with just a brief excursion from the city of Split.

Perhaps you want to devote your entire yacht charter holiday to the exploration of the nautical paradise located just by the magnificent city of Šibenik. An archipelago of 89 islands, the largest one being Veli Kornat, is an opportunity to experience untouched nature in the heart of Europe. With endless turquoise beaches, a rugged landscape and coastline that's just heaven for divers, and unique flora & fauna, Kornati National Park is the perfect place to just let your hair down and enjoy the environment.

With few year-round residents, the archipelago gives an impression of desert islands where you can pretend to be Robinson Crusoe. If at any moment you feel longing for the comforts of a large city, Šibenik and its gothic masterpieces awaits you on one side, and Zadar, famous for Venetian and Roman remains, on the other.

Located in the star-studded Hvar Rivera, this archipelago boasts serene beaches, luxurious restaurants in the middle of nowhere, eerie islands where nature conquered man, and swish marinas full of superyachts. With so much contrast to offer, it is easy to understand why Hell Islands have become a yearly pilgrimage of the rich and famous who come here every summer to enjoy the magnificent nature.

According to legend, Hell Islands came to exist as a love child of the affair between Posseidon and a nymph. During your charter cruise in Pakleni Otoci, you will see secret sandy beaches and the popular Palmizana beach, famous shipwrecks, and diving locations for beginners and professional explorers of the deep blue.

Any extreme sports enthusiasts onboard? If so, let us take you to the Zrmanja River in Dalmatia, where daring locals and tourists come for rafting and kayaking in the strong currents of the canyon surrounded by waterfalls.

Or, you might just want to soak in the scenery and marvel at nature, especially the unique spring that comes from a 200 metres high funnel-shaped rock, Misije.

If you want to explore the striking scenery around Dubrovnik, we recommend a visit to the Bačin Lakes, with a rare phenomenon that causes crypto-depression. No, we’re not talking about the sadness of selling bitcoin at the wrong moment, but rather the fact that the bottom of these 7 fresh water lakes are located below sea level. Come here for a day of cycling, boating, and swimming in a scenic environment that will feel you with positive energy for the rest of the year.

Known to many as “Little Dubrovnik”, Korčula is an island whose beauty matches that of its neighbour city, but has fewer tourist crowds and a more authentic appeal. The looks of the island and its main town haven’t changed for centuries and are full of architectural masterpieces that will knock you off your feet.

One of them is surely the Cathedral of St. Mark, which aside from playing an important role in the religious life of locals, serves almost as an art museum.

Completed in the 15th Century in Gothic and Renaissance styles, this cathedral is home to two Tintoretto paintings and numerous other baroque statues and artworks.

When you’re on your way for a yacht charter adventure in Kornati, make time to visit a more contemporary masterpiece located in the city of Zadar. The Sea Organ is an experimental music instrument that uses the sea waves to create a haunting sound. The project was completed in 2005 and envisioned by Croatian architect Nikola Bašić. Located on the promenade of this ancient city, the Sea Organ represents a prodigious and avantguard idea that was awarded the European Prize for Urban Public Spaces.

More ethereal-looking waterfalls? If you were impressed by the Plitvice Lakes, and you want to explore more of Croatian natural wonders, we recommend a visit to the Krka National Park, just outside of Zadar.

Shaped like a set of balconies, the Krka and Čikola Rivers create the 45-metres high Skradinski Buk, the longest out of 17 waterfalls found here. What is best, unlike in the Lakes of Plitvice, swimming is allowed here and the water tends to be warm and calm.

Deem yourself to be a bit of a speleology lover? Visit the prettiest grotto in Croatia, an enormous rock cave with iridescent sapphire seas, just 5 kilometres away from the island of Vis in Dalmatia. The cave was discovered in the 19th Century and is now one of most popular attractions for tourists - it even has an entrance that allows luxury yachts to enter.

The Eye of Earth

Perhaps you find this “eye” familiar, as it became viral on Instagram lately. The “eye” is really just a spring of the Cetina River. This body of water is formed by a hole that penetrates to unimagined and underexplored depths - the deepest humans managed to enter was 115 metres. Because of the shades of blue and turquoise, and karst surroundings, it reminds observers of the iris or pupil of the eye. 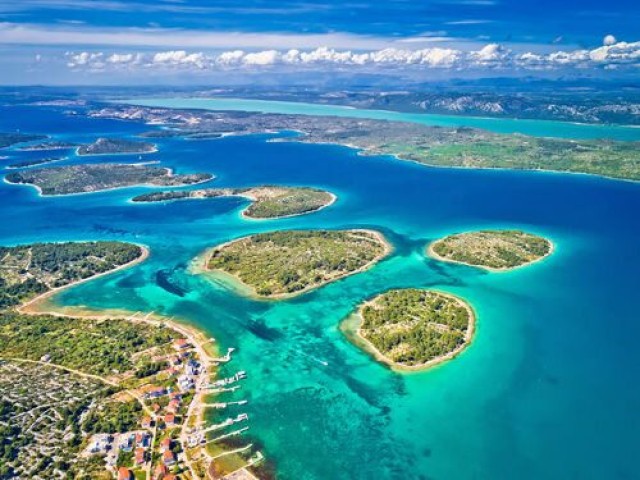 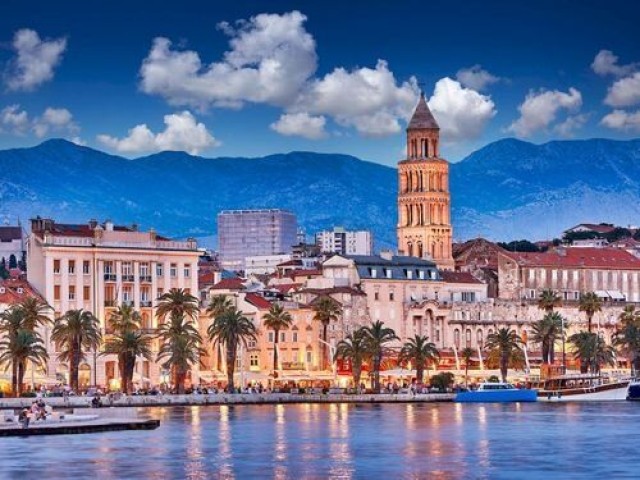 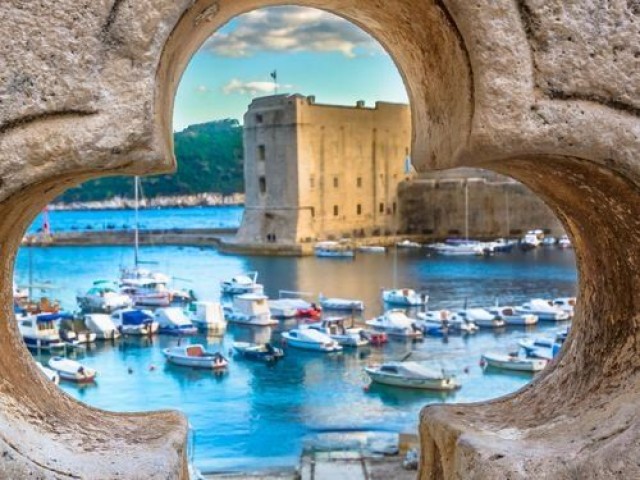 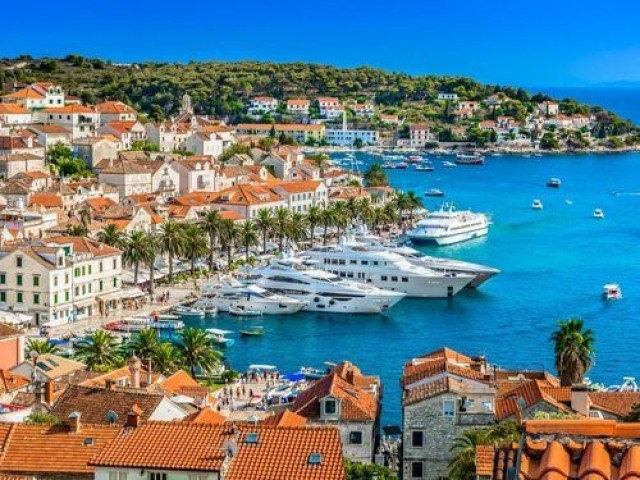